Calpheon is one of the oldest kingdoms of the Great Continent. It is ruled by lord Eddric. This kingdom is not as big and rich as Valencia but is one of the major political forces. Unlike Valencia Kingdom that puts a lot of efforts into science and scientific discoveries, Calpheon pays a lot of attention to trading and building strong army. These factors allow Calpheon to participate in political life and to be a rather strong force. 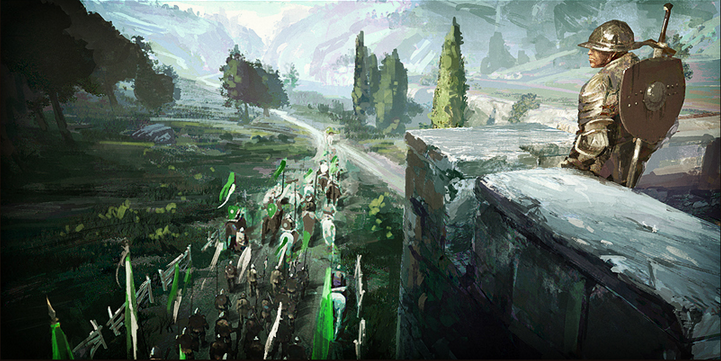 Any merchant from the western part of Great Continent is proud to work with merchants from Calpheon. Moreover, Calpheon merchants control all big deals and it’s impossible to make a big deal without their permission. These merchants are the most powerful members of the Council that was created to limit power of monarch. Council is responsible for controlling economic and political life of the kingdom. Lord Eddric didn’t pay a lot of attention to this. He was grown by a warrior and that’s why he likes warfare.

Rich merchants from Calpheon always wanted more and more gold and that’s why most of them started to think about benefits they could get from attacking Valencia. But they knew that all their efforts will be useless without the support of Lord Eddric. Only Eddric could help them to gather big forces for such a difficult campaign. Valencia is separated from Calpheon by a huge desert and such campaign requires many warriors and strong leader.

Moreover, only Eddric could get the support of Balenos and Serendiya cities. Their forces and knowledge would support the army a lot. Balenos had great horsemen and Serendiya could help with armor and weapon. Calpheon didn’t have enough ore to meet the requirements and the campaign requires a lot of metal.

But this campaign was only a dream of greedy merchants. No doubt that Eddric was the best warrior and commander on the whole continent, but he didn’t want to fight just because of gold.

One day 4 of the most important Calpheon trade spots were attacked by unknown forces and robbed. It was obvious that the attackers used powerful magic to win. This magic was based on deadly power of the Black Stone. All elder men of the Kingdom thought that secrets of this magic were lost. All people were upset with this attack and only members of the Council were happy. They understood that it’s a pivotal point for Eddric.

Lord asked the Council to find out everything about attackers. The answer was received pretty fast - all evidence showed that attackers were from Valencia. Eddric didn’t have choice and formed an alliance for campaign against Valencia. He asked Balenos and Serendiya for help and they didn’t refuse.