Combat system in all MMO games consists of 2 general parts: Player versus Environment (PvE) and Player versus Player (PvP) fights. PvP in Black Desert is based on the war between core territories. If you want to find out more you can read lore section of the website.

Each player can take part in PvP fights after 40th level without any restrictions, but if you want to start earlier you can do it. There is a special quest which will allow your character to fight against other players from 35th level. It’s you to decide if you want to wait or not.

After you complete the quest or reach 40th level you will see special button on your screen. This button can activate PvP mode. All you need to attack other player is to toggle it.

Black Desert Online is a game with open world PvP and you can attack other players almost everywhere except large cities and villages.

If you want to fight you need to activate PvP mode. While you have this mode activated you are free to attack any other player if this player is allowed to participate in PvP (40th/35th level). You can even attack players who have turned off their PvP button. But you will be receiving karma points if you kill such players. You can also be attacked any time by other player.

If your PvP mode is on, attacker will not get any penalties. By activating this mode you tell other players that you are ready to fight. This system is pretty similar to PvP system of many other MMO games.

You can’t attack players with level lower than 35/40. Low level players are protected from being attacked by the game. 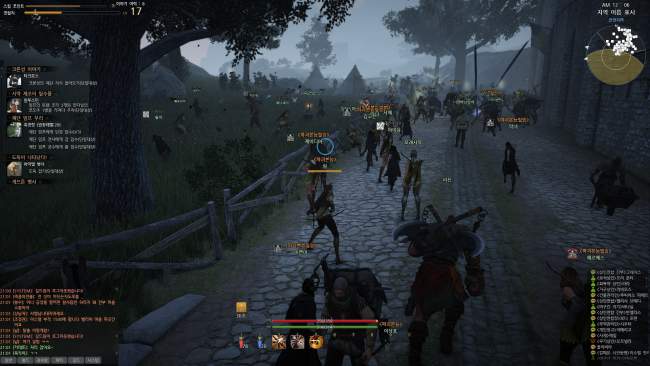 If someone attacks and kills you while your PvP mode is switched off he will receive special karma points for this. A player gets 5000 karma points for each PK. If your karma is high you will be attacked by guards and other players even in peaceful areas where normal PvP is not allowed. As you see it’s rather difficult to be Player Killer.

There is only one way to decrease the amount of karma points – you need to kill monsters.

Life of a criminal with very high karma is much more difficult than the life of a normal player.

When you play Black Desert you will enter a guild sooner or later. Guild will help you to advance faster and will open new opportunities for having fun. If your level is higher than 40 you can create your own guild. Up to 80 members can be in one guild.

Rules of guild war differ from rules of PvP fight. The core difference is that when you attack and kill player of the enemy guild you don’t receive any karma. This rule also works when you participate in sieges.

As you know it’s possible to send caravans in other cities on order to make money. It’s a part of in game economy. But it’s also possible to rob caravans of other players! Caravan owners will sometimes protect their property and that’s where a lot of PvP fight will take place.

Right now there are no battlegrounds in the game. And to be honest we don’t think that developers will add something like this. If you want to fight against other players you can do it almost everywhere.

There are sieges in Black Desert where one guild protects their castle while the other one tries to take it. A lot of players can participate in a siege at the same time. Sieges are the best place for group PvP fights where tactics matters a lot.

Sieges are not just crowd vs crowd fights. If your group is coordinated you can protect castle from large number of enemies. There are also different types of siege equipment available. Siege machines can be used by both sides.