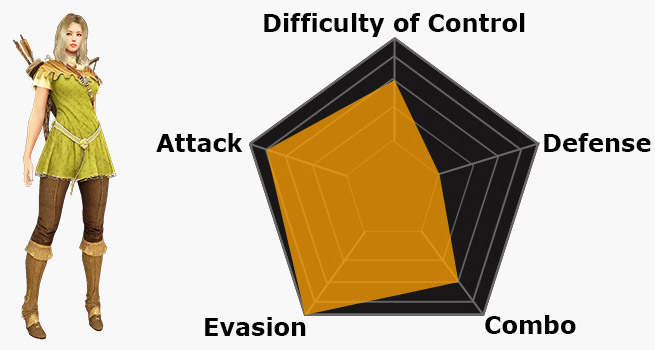 
« Vote for Ranger class. Click "Recommend" if you are playing or are going to choose this amazing class for your character. The results will be saved and compared with results of other classes.

Ranger is rather flexible class, she can fight face to face with enemy or use bow to attack him from the distance. The mechanics of gameplay in Black Desert is similar to mechanics of RDD in other MMO games: you need to snare / stun / control enemy, kite him and try to keep distance in order to win. If you have played such class before you will have no troubles to master it in BD.

Bow gives Ranger opportunity to attack enemies without coming close. It’s a good advantage, but as any other ranged class, she has very low defense. This leads to receiving a lot of damage if enemy comes close and attacks you. Of course you can always doge attacks but it’s not so easy to do this as it may seem. Monsters and other players in BD are moving fast and you will have to keep distance to survive.

Ranger is a DPS class meaning she has very strong single target damage abilities. Even simple bow attacks deal good damage. If you have enough skills to kite and avoid attacks you can be serious threat to other players, even in PvP.

AoE attacks of the class are not so strong. Ranger has some Area of Effect abilities but they are mostly for controlling enemies. For example there is a great AoE stun and if the monsters are really close to each other this stun may affect them all. Such abilities are great when you fight against group of monsters.

In general this class is not for dealing AoE damage. If you want to deal sufficient damage to multiple enemies at once you should try Sorcerer class. Sorcerer has more AoE attacks while Ranger is focused on single-target abilities.

Controlling enemies is one of the most important aspects of being a ranger. As it was said above there is a special stunning skill which can control enemies, but it’s not the only way to do it. There is one more way to control opponents – use kicks. Kicks make enemies feel dizzy. This effect is like a stun but when you hit enemy once more the dizzy disappears. This may help you to increase distance if enemies come close.

After you use kicks enemy will be stunned for a short period of time. This time will be enough for you to increase distance.

As you see Ranger is a great RDD with all traditional advantages and disadvantages of such role. Don’t forget that male and female characters with bow have different abilities!